Recently I hopped in my trusty 2006 Jeep Liberty for the drive to visit my old friend Parnel in Connecticut. From Newport, the drive took a little over an hour and a half. As I was pulling into to the town where Parnel now lives I saw a sign that said “Incorporated 1786” and it caused me to speculate what that trip would have been like in 1786. I would say that on the combination of highways and two-lane country roads that got me there, my average speed was 50 miles per hour. So I asked Parnel, who is a life-long student of 18th Century American history, “How long would this trip have taken in 1786?” Three days. News in those days traveled at the same speed as people and horses. In so many ways, it was a very different time.

Many of my Great American web sites focus on the period of American history around World War Two. Looking back 70 years we see our great country in one of its finest hours, when Americans pulled together with mind-boggling work, determination, courage, and ingenuity to win the war. Having allowed our military strength to weaken after World War One, in the futile hope that it had been “the war that would end all wars,” we had to gear up fast and build thousands of planes, ships, and tanks in a herculean manufacturing endeavor the world had not seen before and has not seen since.

Somehow I see a connection between wood working in Colonial times and what we did to win World War 2. Great American web sites celebrate the uniquely American way of making things. When the first colonists arrived, they brought tools with them, mostly from England. And what the new land offered was a seemingly endless supply of timber, including many fine hardwoods. So the colonists made things from wood from log cabins to fine furniture. Before factories, before steel mills, Americans worked wood.

With large 2-man “pit saws,” they turned logs into beams and boards. One man stood on top of the log where he could follow a guide line, and the other man stood in the pit. I don’t know how long it took two men working a huge saw up and down to cut through a 10 ft. log, but it surely was hard work. This is how the building of our great nation started. The canals and railroads would come later. In the Colonial era, we needed homes, wagons, barrels, and furniture. The skills, as well as the tools, of the wheelwright, cooper, and cabinet maker came mostly from England. By the end of the 18th Century Americans had innovated some of their own styles and were making many of their own tools.

This section of the web site will focus on the skills and tools of the cabinetmaker. I am very fortunate to have a friendship with Parnel, because his knowledge passed down from many generations of carriage makers, wheelwrights, and cabinetmakers, and his understanding of the subject represents a lifetime of study.

Parnel Desautel is probably the most focused individual I have ever known. He has spent over 70 years — literally since the age of 12 — dedicated to studying the craftsmanship of John Goddard, the 18th Century Newport cabinetmaker.

I met Parnel in the late 1970’s because he needed a photographer to take pictures of his work. At that time his income came from commissions to build fine Goddard reproductions.

Before that time, antique furniture had zero appeal for me, but Parnel introduced me to a world of craftsmanship that then became fascinating.

But there were many fine craftsmen in 18th Century America who made very impressive furniture. What made John Goddard so special? It is a question I have been asking Parnel for most of the nearly 40 I have known him. What was it about Goddard that so impressed him at the age of 12 as to inspire a lifetime of dedicated study? Parnel’s answer was straightforward: John Goddard was a man who did not believe in taking shortcuts. That’s it? I would think to myself. But over the years I have come to understand something of what he meant.

Parnel Desautel learned cabinetmaking in a traditional apprenticeship to his father starting at a very early age. He was just 13 when he completed his first Goddard reproduction, a tall case clock with a shell carved in the door. It stood in the corner of his wood shop, and you needed Parnel’s help to see its imperfections.

Much of what he learned from his father had been passed down from one generation to the next. Parnel’s forbears had been carriage makers for the royalty of France. They fled to Canada to avoid execution in the French Revolution and carried on their trade as wheelwrights in Quebec. You could say that much of what Parnel knows about working wood is ancestral. The traditional method for drying wood is an example. It is very involved and, in fact, quite scientific. Modern experts will tell you that new technology in Kiln drying wood makes the old ways unnecessary. And Parnel will point out that these modern experts are not carving a Goddard 3-shell desk lid from a slab of black walnut over four inches thick. Parnel can explain in detail why it is necessary to test the soil at the base of a black walnut tree before it is felled and then dry the thicker cut slabs over a period of 20 years, stacked in a certain way, before starting to work on something like a 3-shell lid. And then he will explain why you cannot remove wood more than 1/16 inch per week in the process of carving the block and shell design. The description of John Goddard as a craftsman who did not believe in taking short cuts begins to come into focus. 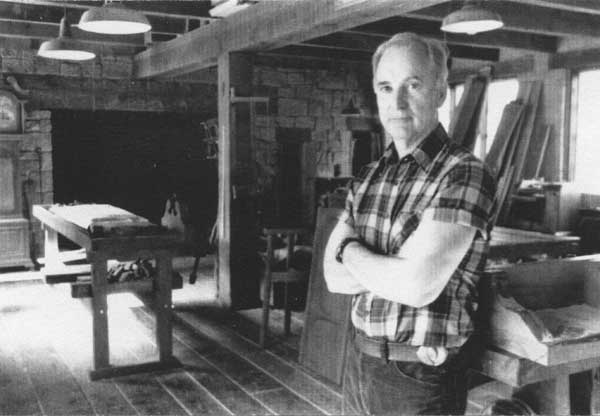 I took this picture of Parnel in his shop in 1990. Off a dirt road called Central Pike deep in the woods of western Rhode Island, Parnel had built a work shop with living quarters above that… well, the shop itself, with its stone and heavy timber construction, was a beautiful work of craftsmanship and reverence for 17th Century, perhaps 16th Century building technique. 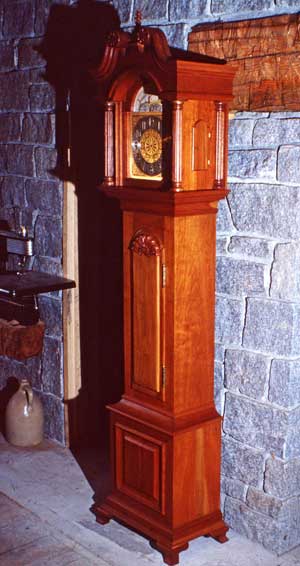 At left: The tall case clock, Parnel completed as a young teenager. He had already spent several years in his pursuit of Goddard’s craft.

The photo in the header of this page features a John Goddard design. It is the 3-shell lid of a secretary desk. I took this picture on my recent visit with Parnel. It is a lid that he has saved in a special case for many decades… his first attempt at carving this Goddard design. It was completed before his 16th birthday.

It was such a failure, he explains, that he was extremely disappointed and nearly threw it out. The problem was that by time the carving was complete, the thick slab of Black Walnut had warped a little and was no longer perfectly flat. This was the lesson that told Parnel that wood this thick would need a drying period of 20 years. John Goddard would have learned the same lesson. No shortcuts.

American Tribute Web Sites
All of the images on this web site are copyright protected and may not be used without permission.